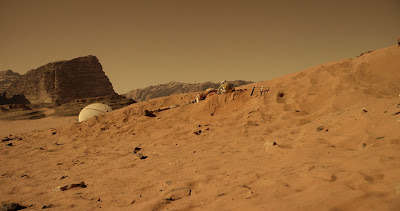 The Martian, 2015. An astronaut is stranded on Mars.

Concept: A
Story: A
Characters: B
Dialog: B
Pacing: B
Cinematography: B
Special effects/design: A
Acting: A
Music: B
Enjoyment: They would have had to have messed this up pretty badly for me not to love it. They did not. It's faithful to the book, only simplifying or cutting things out for time. The book is much more effective, though (although maybe that's just because I didn't know what was going to happen). I really hope this new trend of science fiction movies that are actually science fiction keeps up. A+

Email ThisBlogThis!Share to TwitterShare to FacebookShare to Pinterest
Labels: 2015 in the theater