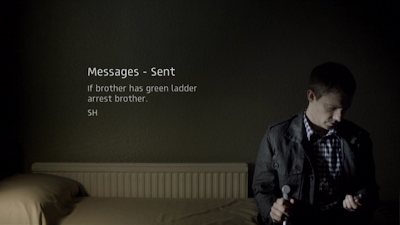 Concept: 3/4 (Good)
Story: 2/4 (Indifferent). How do you ruin Sherlock Holmes? Make him dumber than the audience.
Characters: 3/4 (Good). Holmes and Doctor Who have always been very similar characters, but when they're written by the same person, at the same time, the line between the two gets annoyingly fuzzy.
Dialog: 2/4 (Indifferent)
Pacing: 2/4 (Indifferent)
Cinematography: 3/4 (Good)
Special effects/design: 3/4 (Good)
Acting: 3/4 (Good)
Music: 2/4 (Indifferent). Often good, but I've got to take a point off for the planetarium scene. So horrible.
Subjective Rating: 6/10 (Okay, 2/4). It seems quite fun at first, but there are enough gaping holes in the quality of the writing that I ultimately find myself annoyed with it more than anything else. The more I see, the more convinced I am that Moffat's few great Who episodes were flukes.
Objective Rating (Average): 2.5/4 (Okay)
Posted by Daniel at 10:41 AM

Email ThisBlogThis!Share to TwitterShare to FacebookShare to Pinterest
Labels: sherlock