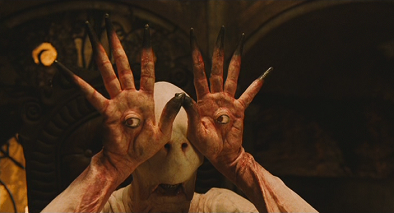 My reaction
Synopsis: a girl's step father fights the WWII Spanish resistance while she tries to escape into a fairytale world
How I saw it: on video a couple times (rented from Netflix), most recently yesterday
Concept: Good.
Story: Good.
Characters: Good.
Dialog: Good.
Pacing: Good.
Cinematography: Bad. I clearly do not understand what makes good cinematography, seeing as this won an Oscar and I thought it looked like crap. (On the other hand, I do understand music, and crap music wins Oscars more often than not, so maybe I should give myself the benefit of the doubt.)
Special effects/design: Bad. Most of it looks great. But the title character is a cartoon. I don't know if it was supposed to look like a cartoon, to emphasize the fact that it's not from the same world as the realistic stuff, but I don't think so. Pretty sure it's just terrible CG. The IMDb's trivia claims there are physical costume components to the character, but I can't see them; I just see a cartoon. It completely takes me out of the movie, and it destroys any hope of the fairytale parts and real world parts of the movie seeming like they belong in the same movie.
Acting: Good.
Music: Indifferent. Good orchestration, bad tunes.
Subjective Rating: 6/10 (Okay). There's the potential for a really great movie. The art direction is amazing (although poorly realized - you just get a glimpse of it here and there). And I can imagine the story being extremely effective. But it's not. Del Toro has a fascinating imagination, but he's a bad director. I have to wonder if my wife and I wouldn't be the only people to realize that if this movie had been his follow-up to Hellboy 2 instead of Hellboy.
Objective Rating: 2.4/4 (Okay).
Posted by Daniel at 3:14 AM