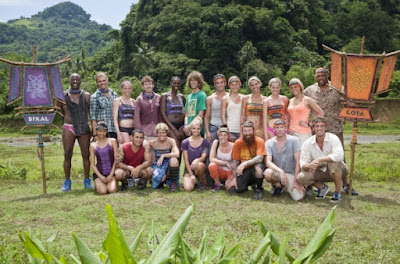 Concept: C
Story: C
Characters: C
Dialog: B
Pacing: C
Cinematography: C
Special effects/design: C
Acting: n/a
Music: C
Enjoyment: The first half of the season is stressful and intense in the worst way: one of the players is apparently not just crazy in the usual reality TV contestant way, but genuinely psychotic - abusive and dangerous. It's a shame, since he renders unwatchable what might otherwise have been a good season. And then another player is pulled from the game because he was starving. This is not entertainment. D

Email ThisBlogThis!Share to TwitterShare to FacebookShare to Pinterest
Labels: survivor