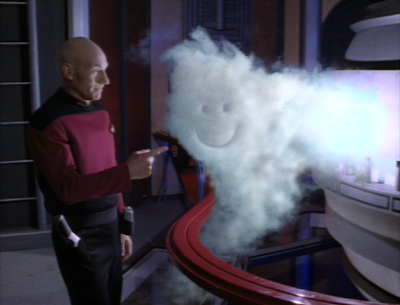 Concept: 4/4 (Great)
Story: 2/4 (Indifferent). Lots of plot holes. Lots of missed opportunities with ideas that should have made great episodes.
Characters: 3/4 (Good)
Dialog: 1/4 (Bad)
Pacing: 3/4 (Good)
Cinematography: 2/4 (Indifferent)
Special effects/design: 1/4 (Bad)
Acting: 2/4 (Indifferent)
Music: 1/4 (Bad)
Subjective Rating: 6/10 (Okay, 2/4). Here is where Star Trek begins is slow, painful decline. A number of episodes are awful; most are mediocre. There are a few great ones, but they're not nearly enough to make up for the crap. To be fair, this season probably isn't as bad as the first couple (both of which I gave a 7/10), but context accounts for a lot. Making a show bad when it was recently so good is very frustrating. And there's not much effort to do anything new or clever, and a lot of attempts to mimic earlier episodes. The only new ground is a change in tone to make it more serious, taking a lot of the fun out of it and making the frequently bad writing less forgivable. Still, it's Star Trek, and I can't help enjoying watching it.
Objective Rating (Average): 2.1/4 (Okay)
Posted by Daniel at 11:40 AM