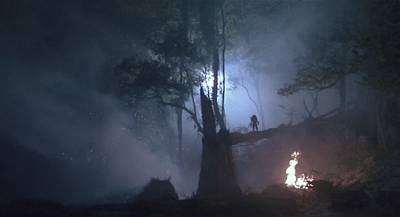 Predator, 1987. An alien hunts soldiers in the jungle.

Concept: 4/4 (Great)
Story: 2/4 (Indifferent)
Characters: 0/4 (Terrible)
Dialog: 0/4 (Terrible)
Pacing: 3/4 (Good)
Cinematography: 2/4 (Indifferent)
Special effects/design: 3/4 (Good). The Predator itself is great. Everything else is kind of meh.
Acting: 2/4 (Indifferent)
Music: 2/4 (Indifferent)
Subjective Rating: 8/10 (Great, 4/4). Half awesome science fiction (which is great), and half terrible 80s action movie (which is also great). Arnold just has a way of making this kind of stuff work. Even in a scene that consists of nothing but shots of guys waving giant guns interspersed with shots of people dying or buildings blowing up (or, more often, people blowing up), you just kind of go with it. He transforms corny into iconic.
Objective Rating (Average): 2.2/4 (Okay)
Posted by Daniel at 1:29 PM